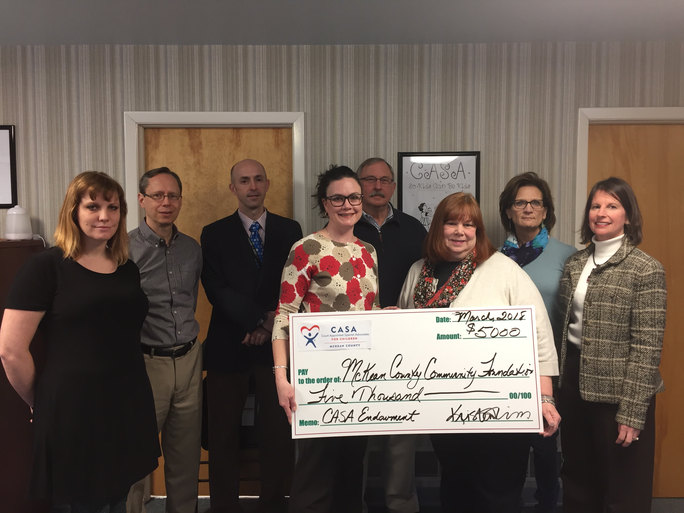 Court Appointed Special Advocates (CASA) of McKean County is preserving and empowering resources through the establishment of its endowment fund with the McKean County Community Foundation (MCCF)!

“Eventually, this endowment could generate enough interest to help support our ongoing operating expenses,” said Kristen Tim, CASA of McKean County’s executive director. “Children 20 and 50 years from now will benefit from what we are doing today.”

Too many children experience abuse or neglect each year. Instead of playing with neighbors and making happy family memories, they’re attending court hearings, adjusting to new foster homes and transitioning to new schools. That’s a heavy burden for a child to carry. With a CASA volunteer dedicated to their cases, McKean County’s most vulnerable children will have someone speaking up for their best interests. With support, more children will have the opportunity to thrive in a loving home.

CASA programs provide volunteers who are committed to support local courts as advocates of abused and neglected children, toward breaking the cycle of abuse so that children can thrive in safe, permanent, nurturing homes. They train volunteers who work on behalf of foster children by providing independent, fact-based recommendations to the court. For more information, go their website: casamckean.org

McKean County’s program chose to partner with the MCCF, an affiliate of the Community Foundation of the Northern Alleghenies, the mission of which is to strengthen the region through development, stewardship and grantmaking as donors achieve their philanthropic goals. MCCF will help to grow the endowment dollars with sound investment policies while CASA staff and volunteers focus on serving children. The foundation will also assist donors who have an interest in starting a fund to benefit nearly any charitable organization or cause in which they have a vested interest, whether as a named fund or in memory of a deceased family member or friend. Interested parties are encouraged to contact the MCCF for more information either by calling (844) 238-2289 or e-mailing us at mccf@zitomedia.net.
Gifts to the CASA of McKean County Fund can be made in any number of ways. For example, people can make a direct financial contribution; they can talk with their estate planner about a planned gift; or name the CASA Fund as beneficiary of a life insurance policy. Memorials are accepted in honor or in memory of someone designated to the CASA of McKean County Fund, and an acknowledgment will be sent according to the donor’s direction.

Contributions of any amount can be mailed to the MCCF, PO Box 708, Bradford, PA, 16701 (checks payable to the McKean County Community Foundation, with “CASA of McKean County” in the memo line). All contributions have maximum tax deductibility. With dedicated effort, the potential income from the fund will secure programs and services for many years. Consider a pledge today to build the future of CASA of McKean County!